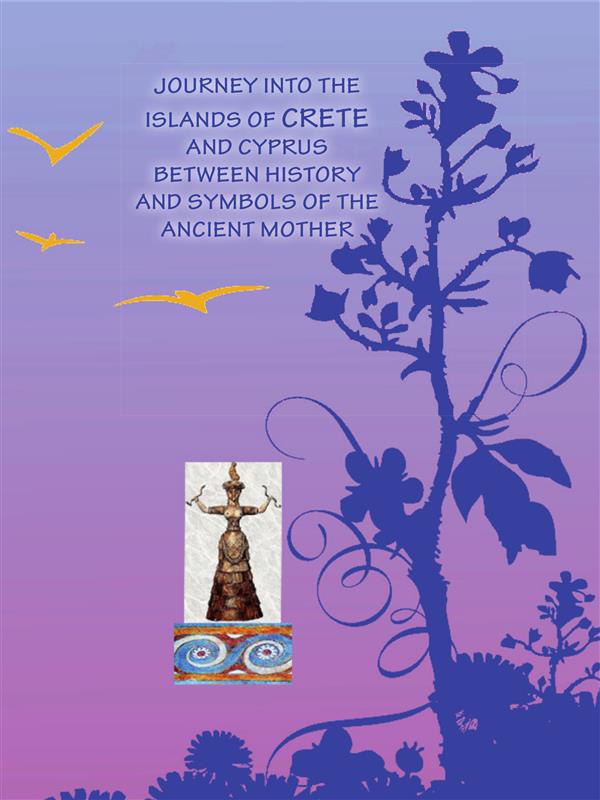 Ever existed in ancient times people who worshipped the Goddess, the Great Mother, in the Mediterranean area? Has there been a long period of peace, in devotion to the Goddess, without war and violence? Before Greeks? And wich were its rituals and its daily life? This book on the islands of Crete and Cyprus, born from the trips in the last years, answers these questions. It is a notebook of a detailed investigation on the origins of the cult of the Mother in the Aegean Sea before the beginning of the greek civilization. Furthermore, the author highlights, in a simple way, how geometric forms in the nature and art decorations have the same origin, and shows the connections between them. Through the cult of the Great Mother and the myths of Astarte and Aphrodite, through the symbols of the spiral, of the dove, and from the swastica to the labyrinth of Minos, you are accompanied in a beautiful interesting journey, manifold, rich in news, images and references. Susanna Casale is an artist, painter and restorer, fond of Art History and a travel lover. Spiritual seeker, she is interested in spiritual and primordial aspects of traditional art, especially of Mesoamerican, Mexican and Mediterranean civilizations. Works and live in Italy.

This is a book that describes the history of the veneration to the cult of the Mother in the Mediterranean sea. The attention of the author is on Crete island and on Cyprus with historical and religious references of the daily life. The aspect that I have found more interesting in the text is the harvest, well documented, of the news on the veneration to the Mother, before the Greek civilization and Roman, in the Aegean sea. With surprise I have discovered, from this book, that in the period of the cult of the Mother goddess to Crete, there has been a period of peace lasted 1500 years, the pax minoica, before the conquest of the you Gild and before the dominion of the Greek. The text also flows on the island in Cyprus where the cult of the Mother is well explained with the figure of Afrodite, Astarte and with the history of the island. The mosaics of the floorings of the sites are also deepened in Cyprus, in an unusual way to my notice, with some sketches that underline the geometric figures of it. There are interesting close examinations on the symbols of the spiral, of the dove, of the swastica, of the dolphins, of the labyrinth of Minosse, of the circle and other still, that do together a precious text of it for the unpublished harvest of these whole reunited news. At the end of the book it is attractive the hypothesis, documented by photo, of the relationship among the geometric figures of the you look for of wheat, of the mosaics, of the decorations in the vases, the hypothesis that leaves free field to the reader for one man shows considerations and conclusions. And' a simple text, flowing, of 118 pages, but rich of news and images all color ones ,of well documented references that of it ago, to my opinion, an essential book for the one who loves to know the historical truth and the true roots on the cult of the Mother in the Aegean one, even before the Greek civilization and of the cult to the god Father. I finish this critique with a positive judgment on the book for me unusual and stimulating with all these information assembled together. smilies/wink.gif